We are committed to supporting our customers and homeowners impacted by recent hurricane events, and providing transparency to our investor partners who share in the credit risk of our single-family book of business. Today, Fannie Mae has added a new feature to Data Dynamics®, our unique analytical tool, in order to provide estimates of loans secured by properties that may have been impacted by Hurricane Irma for both our Connecticut Avenue Securities™ (CAS) and Credit Insurance Risk Transfer™ (CIRT™) programs. This information can be found in the column labeled "Potential Irma UPB (%) Filter" on the "Deal issuance and Performance Data" reports for both programs. This column shows deal-level estimates of the percentage of unpaid principal balance in the indicated CAS or CIRT reference pools where the underlying properties are in areas that may have been impacted by Hurricane Irma. Fannie Mae is adding this feature in addition to a similar filter previously provided for Hurricane Harvey. The figures were derived based principally on information about geographic areas potentially affected by the storm, including data regarding wind speeds, storm surge areas, rainfall levels, and other information. It is likely that only a subset of properties in the identified areas suffered damage due to the storm.  This information is highly preliminary and subject to substantial revision as additional information becomes available. As Fannie Mae receives updated information from a variety of sources about the impact of the storm on geographic areas and individual properties, we will periodically update this information and reflect this on Data Dynamics.

In addition to this enhancement, Fannie Mae is announcing today that it is updating its treatment of loans with disaster-related forbearance due to Hurricane Irma for CAS transactions issued under the 'fixed severity' framework (those deals from CAS 2013-C01 through and including CAS 2015-C03). This update is consistent with the update that Fannie Mae announced on August 31, 2017, that specifically addressed loans impacted by Hurricane Harvey.

Due to the magnitude of Hurricane Irma, we expect to see an increase in the number of borrowers being offered disaster-related forbearance in the areas affected by this significant storm.  With this update, loans that are granted temporary forbearance as a result of Hurricane Irma will not be deemed to have experienced a credit event at 180 days delinquency. Rather, Fannie Mae is announcing that it will wait until the later of 20 months from the point at which a servicer grants initial disaster recovery relief to a borrower or three months from the conclusion of its forbearance period due to Hurricane Irma to evaluate the related loan for a delinquency related Credit Event. The below table describes the updated treatment in additional detail.

Fannie Mae reserves the right to evaluate each situation independently.  The update described in our August 31, 2017 announcement and this announcement regarding the timing of recognition of credit events for the referenced CAS transactions applies only to loans impacted by Hurricanes Harvey and Irma, respectively, and does not mean that similar actions will be taken in the event of future natural disasters. 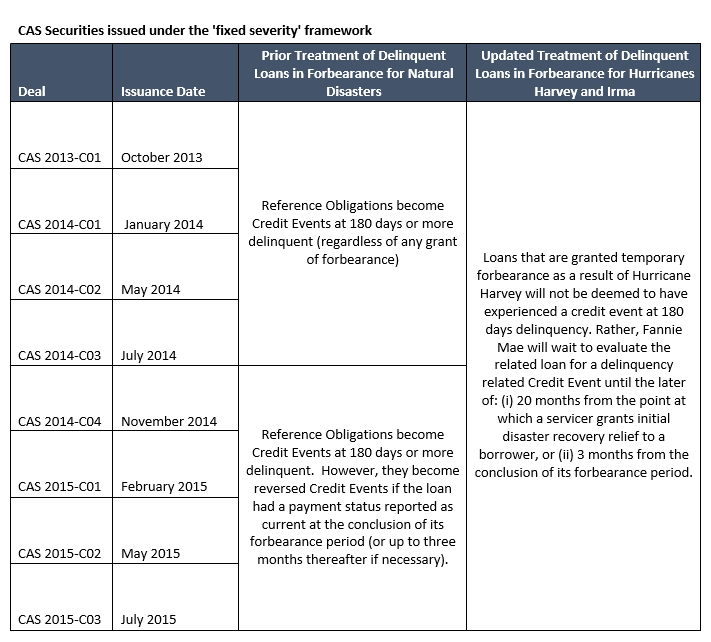 The treatment of all other events defined as credit events under the CAS fixed severity framework will remain unchanged:

CAS offerings beginning with CAS 2015-C04, issued under the ‘actual loss’ framework, are not impacted by the update described above and will remain subject to the timing and loss calculations as described in such offerings.

Market participants may contact the Fannie Mae Investor Help Line at 1-800-2FANNIE, Option 2, or by email with questions.