One year has passed since the 2017 hurricane season that impacted homeowners in Texas, Florida, Puerto Rico, and the U.S. Virgin Islands. Fannie Mae's standing disaster relief policies allowed lenders and servicers to provide expedient assistance to borrowers, enabling them to focus on recovery and rebuilding. The primary tool for immediate borrower relief available to servicers is a payment forbearance plan, which was widely implemented following last year’s hurricanes. Payment forbearance grants immediate relief by permitting borrowers to reduce or suspend their regular mortgage payments during a time of temporary hardship.

Honoring our commitment to provide transparency to our investor partners, Fannie Mae enhanced its monthly reporting disclosures around the use of forbearance for our credit risk transfer (CRT) programs, Connecticut Avenue Securities®(CAS) and Credit Insurance Risk Transfer™ (CIRT™), shortly after the hurricanes. Now that a year has elapsed since the hurricanes, we provide insight into reporting for disaster relief and workout methods, and reflect on credit performance trends in affected regions. Investors may find this guidance useful for analyzing the performance of affected loans, and for developing performance expectations in the event of future natural disasters.

As detailed in our Hurricane Relief FAQs published last year, servicers are authorized to grant an initial forbearance plan to a borrower who they suspect has been impacted by a natural disaster, whether they have achieved contact with the borrower or not. The terms of forbearance plans are variable depending on borrower circumstances, as described below.

In an effort to provide greater transparency to investors, Fannie Mae provides several fields that help illustrate the status of a loan in various stages of its lifecycle.

Forbearance Indicator: Fannie Mae added a forbearance indicator field to the monthly reporting files for our CRT programs starting in December 2017. This field is typically populated using information reported by the servicer for the entire duration of the payment forbearance plan.

Next Steps in Borrower Assistance

Payment forbearance enables Fannie Mae to quickly provide needed relief to numerous borrowers while servicers on the ground determine how to best address the long-term needs of borrowers. After a loan is granted payment forbearance, servicers evaluate the individual situation of each borrower in order to determine the appropriate next steps. Fannie Mae generally delegates these loss mitigation efforts to servicers, many of whom leverage Fannie Mae's Servicing Management Default Underwriter™ (SMDU™) tool. The servicer must first achieve contact with the borrower, and depending on the workout method and level of delinquency, a Borrower Response Package that documents income and hardship may be required to properly evaluate the borrower's situation. If the hardship is determined to be temporary, a reinstatement or a repayment plan may be the most appropriate course of action. If the borrower is facing a more permanent hardship, the servicer will evaluate the borrower for a loan modification. The last options in the workout hierarchy are a short sale and deed-in-lieu of foreclosure. Exhibit 1 describes the various workout method and how those workout methods appear in CRT disclosures.

With a year of performance history since the 2017 hurricanes, the market has started to take stock of loan outcomes in the affected regions. At the time of the storms, approximately 8.2 percent of the unpaid principal balance (UPB) referenced by the CAS and CIRT programs was located in a county that was affected by Hurricanes Harvey, Irma, and Maria.4 Of the UPB in hurricane-affected regions that was current as of the August 2017 activity period, approximately 4.2 percent became 60 days or more delinquent between the September 2017 and December 2017 activity periods. After peaking in the November 2017 activity date, delinquencies in hurricane-affected regions declined as a result of borrowers self-curing, as well as the loss mitigation strategies discussed above. As of the July 2018 activity period, just 1.2 percent of the UPB in hurricane-affected regions is 60 days or more delinquent, compared to a 60-day+ delinquency rate of 35 basis points overall.

Exhibit 2 below illustrates the borrower relief and workout methods employed for this population of loans, as reported in monthly remittance data. 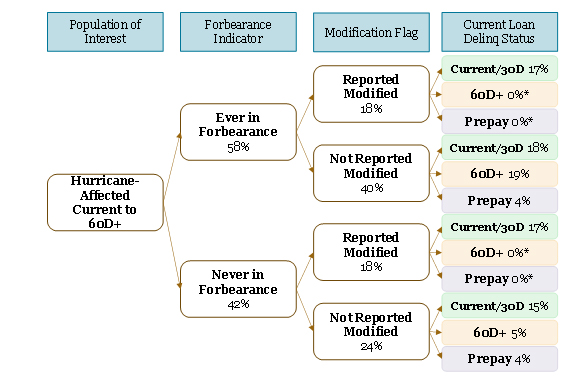 Note: This analysis isolates loans in hurricane-affected regions that were current in August 2017 and became at least 60 days delinquent between September 2017 and December 2017. It tracks their subsequent performance through the July 2018 activity date. Numbers may not sum due to rounding. Numbers with an * are non-zero but less than 0.5 percent.

Fannie Mae stands with those affected by disasters as they work to recover and rebuild their communities, and is focused on providing support and assistance during such times of crisis. We also honor our commitment to our investor partners by providing transparency into loan performance. Please reach out to the Fannie Mae Investor Help Line at 1-800-232-6643 or by e-mail with feedback or questions.

4 For purposes of this analysis, we define hurricane-affected loans as those located in counties designated by FEMA for Individual Assistance.

This commentary is provided by Fannie Mae solely for informational purposes based on information available at the time it is published. This document is based upon information and assumptions (including financial, statistical or historical data and computations based upon such data) that we consider reliable and reasonable, but we do not represent that such information, assumptions, data, or computations are accurate or complete, or appropriate or useful in any particular context, including the context of any investment decision, and it should not be relied upon as such. It is subject to change without notice. Fannie Mae disclaims any responsibility for updating the commentary or the opinions or information discussed herein. The opinions presented in the commentary represent the views of professionals employed by Fannie Mae of certain factors that may impact the performance of certain loans in Connecticut Avenue Securities reference pools. The effect of factors other than those assumed, including factors not mentioned, considered or foreseen, by themselves or in conjunction with other factors, could produce dramatically different performance or results. Statements in this commentary regarding the future impact of data quality improvements are forward-looking, and actual results may be materially different due to, among other reasons, those described in "risk factors" in our most recent Form 10-K and Form 10-Q. Fannie Mae does not represent that such views are the sole or most accurate explanations for loan performance or that there are not credible alternative views or opinions. Fannie Mae publishes this commentary as a service to interested parties and disclaims any liability for any errors contained herein. Fannie Mae securities are more fully described in applicable offering circulars, prospectuses, or supplements thereto (such applicable offering circulars, prospectuses and supplements, the "Offering Documentation"), which discuss certain investment risks and contain a more complete description of such securities. All statements made herein are qualified in their entirety by reference to the Offering Documentation. An offering only may be made through delivery of the Offering Documentation. Investors considering purchasing a Fannie Mae security should consult their own financial and legal advisors for information about such security, the risks and investment considerations arising from an investment in such security, the appropriate tools to analyze such investment, and the suitability of such investment in each investor's particular circumstances.